Just as it was

Sa Farinera's history is deeply linked to Mallorca's XIX Century history. It's a clear example of the transformations that the island and its society went through in the sixties with the touristic boom. It was a family flour business that has been maintained until today thanks to its conversion into a restaurant. It was originally known as Cas Xeriquet flour mill due to the nickname of Antonio Caldès Amengual, its founder, who was a native of Llucmajor where the Molí de'n Xeriquet's flourmill stands. His parents were millers so he learnt the work at the mill, how to sharpen millstones and became a master miller. He was the miller at Sa Torre (Llucmajor), a wealthy estate at the time.

Among his many works as a miller, the restoration of Es Jonquet Flour Mills (Palma) must be mentioned. It was done for the American film "Jack, the Black" with George Sanders as the main character. When his son Antonio Caldès married, he took over the business and moved to the mill with his family. There were periods of great prosperity thanks to the prominence of flour mills in a basically agricultural economy and to being located in Es Pla de Sant Jordi, a very fertile land at the time.

Sa Farinera also lived hard years during the Spanish Civil War and after. Its production was controlled and the millstones were sealed out of duty.But there was always some black market. At night, the carts hidden in the pinewood would wait in a long queue to have the grain ground. Eventually, new flour mills, more modern and efficient, appeared and they had their old millstones replaced with steel hammers.

Then, the sixties arrived with the touristic boom and Mallorca had to adapt to the new needs... Our flour mill saw the beginning of Son Sant Joan Airport and with it many fertile lands around disappear. The business went down. For old granddad Toni, the flour mill was his life and was reluctant to leave the flour mill to its fate. The next generation visualized another future for our dearly loved flourmill. It was turned into the first meat grill of Mallorca (1962). Run by old granddad Toni, it became one of the most popular restaurants where clients themselves could cook their own meat.

Nowadays we have tried to keep the nice atmosphere of the old days. Our meat grill has been opened since and we are proud to offer excellent meats prepared on wood fire.

An enjoyment for all your senses! 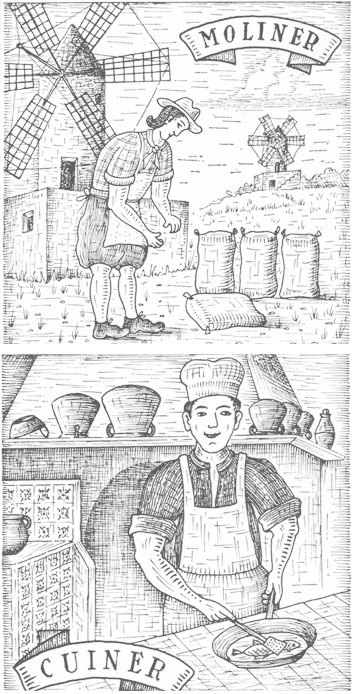